There are six species of Guizotia with G. abyssinica being the only cultivated species (Baagø, 1974). Niger seed belongs to the same botanical family as sunflower and safflower (Compositae). The crop grows best on poorly drained, heavy clay soils (Alemaw and Wold, 1995; Francis and Campbell, 2003). Niger is cultivated in both temperate and tropical climates, being considered a temperate-region plant that has adapted to a semi-tropical environment. It prefers moderate temperatures for growth, from about 190C to 300C

The niger seed usually contains 30% oil, in some accessions from Orissa in India have larger seeds than average, and medium seed types from Karnataka have higher oil content (e.g. up to 43%; Mehra and Arora 1982). The soybean and Sunflower seeds contain 18–23% oil and 38- 50% of oil.

USES AND BY PRODUCTS OF NIGER

Niger is cultivated as an oil seed crop, the seeds yielding about 30% of a clear, excellent, edible oil which is slowdrying, used in foods, paints, and perfumes and as an illuminant and also in industrial purposes. It is used as a substitute for olive oil, can be mixed with linseed oil, and is used as an adulterant for rape oil, sesame oil, et al. Seeds can also be used fried or as a condiment.. Seed is commonly used as food for birds. After the chemical conversion of niger seed oil into niger biodiesel, glycerin is obtained as byproduct and used in the soap production. The plant remains after threshing could be used as green manure for the soil.

1)  WHEN NIGER SEED DRIES OUT, BIRDS WON’T EAT IT
Niger is a oily seed which makes it an excellent energy source for the birds that eat it.  But its oily nature also causes it to dry out AND LOSE ITS ATTRACTIVENESS TO BIRDS.

Birds will turn their beaks to old niger seed.  Avoid waste by only purchasing niger in a quantity you’ll use in a month or two.

2)  NIGER SEED IS NOT THISTLE SEED (AND OTHER CONFUSING THINGS ABOUT THE NAME)
Niger seed used to be called thistle, but it is not the noxious thistle weed we see growing on roadsides.  It typically will not germinate under your feeders since the USDA requires that all niger seed imported to this country be heat-treated to sterilize the seed.

Niger seed can also be kind of dusty so seed processors may add a small amount of vegetable oil to the seed before bagging to keep the dust down.

Niger is an agricultural crop imported primarily from India, Ethiopia, Nepal and Burma (Myanmar). In these countries, it is processed into both cooking and lighting oil. You may also see it called nyjer or Nyger®.

3)  NIGER SEED HAS A SHELL
As small as it is, a niger seed does have a shell.  If you think birds aren’t eating the seed because you see some on the ground, examine it more closely: you may be seeing mostly the thin niger hulls.

4)  WHEN NIGER SEED GETS MOLDY, IT IS BAD FOR THE BIRDS
Niger seed is vulnerable to spoilage while in the feeder. Replace niger seed every 3-4 weeks if it is not being actively eaten.

Shake the feeder daily to help prevent clumping and mold. Make sure the seed stays dry; a weather guard can help in this regard. If bird activity slows, only fill the feeder halfway.

If the seed gets moldy, it should be discarded and a 10% bleach/water solution should be used to clean the feeder. The WBU EcoClean Finch Feeder has antimicrobial protection and a Quick-Clean™ base to help make cleaning a snap!

And a bonus to feeding niger seed?  Squirrels typically ignore it when fed straight up!  So hang those niger feeders and enjoy the finches and other birds

Optional parameters are voluntary and may be analyzed as per buyer-seller agreement. 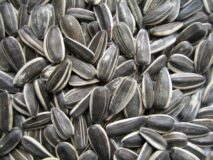 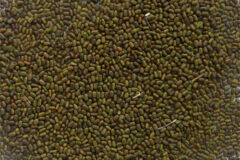 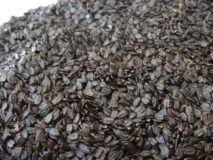